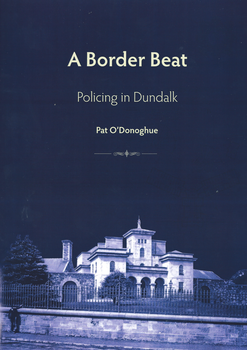 In 1922 the Louth-Armagh county boundary became part of an international frontier, and Dundalk became a border town.

Throughout its existence of almost 100 years, Dundalk Garda District has had to deal with more than its fair share of border-related incidents and associated crime. Pat O’Donoghue, a retired member of An Garda Síochána who served in this district for 30 years, gives a first-hand account of the many challenges faced by the Gardaí in Dundalk Garda District through the 70s, 80s and 90s, focussing on some key events and personnel. He also takes a retrospective view of policing in the area in earlier times, from the era of the Royal Irish Constabulary in the 19th century to the earlier days of the Irish Free State.

This timely and absorbing account is complemented by a broad selection of period photographs and illustrations, many from private collections.