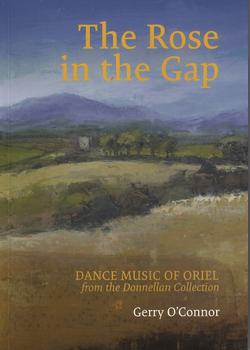 The Rose in the Gap (book)

The Rose in the Gap Dance Music of Oriel from the Donnellan Collection by Gerry O'Connor (Paperback). The Southeast Ulster area of Ireland is known as the Oriel region and has a significant local repertoire of instrumental music and song. Fiddle player, Gerry O'Connor from Dundalk has edited and transcribed the dance music of the Donnellan Collection in a contemporary playing format and has included audio files of all tunes, available online, airing them publicly for the first time in over a century.

Luke Donnellan was a priest born in Armagh city in 1878. Among his many endeavours to preserve the rich cultural and musical offerings of the southern Armagh area he collected the music of over 300 traditional dance tunes, mainly reels, hornpipes and marches, known as the Donnellan Collection.

"The music has been reworked where graphic error or illegibility demanded, a sympathetic process which benefits from Gerry’s intuition and skills. Vital too has been the inside knowledge which he gained through playing the Donnellan tunes for decades as well as his appreciation for their parent culture, the music of South Ulster. Gerry’s edition opens a new window on the old scene of traditional music in Ireland” - Fintan Vallely - musician and writer on traditional music.