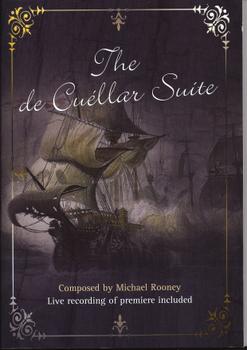 In May of 2012, ‘The de Cuéllar Suite’ was launched in book and CD format. The accompanying CD is a live recording of the suite premiere, featuring over 65 musicians and a full hour of music.

The de Cuéllar Suite is based on the story of Captain Francisco de Cuéllar, one of the few survivors from the Spanish Armada ships, which foundered off Streedagh Strand, Sligo in 1588. After many extraordinary escapades, he wrote to King Philip the second of Spain while in the Spanish Netherlands on his way home. The music portrays the Armada’s engagement with the English fleet, their defeat and subsequent desperate struggle to return to Spain by sailing North around the Scottish and Irish coasts, where many of the ships were wrecked in an exceptionally stormy Autumn. The compositions depict De Cúellar’s adventures and struggle to survive as he made his way from Streedagh through North Sligo and Leitrim. The suite was specially commissioned for Ceol na nÓg, Sligo and aCentral Folque, Santiago. It was premiered in Sligo in June 2011.