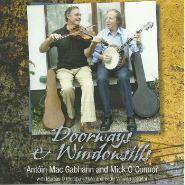 Antóin MacGabhann was born and raised in Kilcogy, Mullahoran, County Cavan. He is one of Ireland's best known traditional fiddle performers. He was the winner twice of the senior fiddle title at Fleadh Cheoil na hÉireann as well as being winner of other major fiddle competitions such as Fiddler of Dooney, Fiddler of Oriel and Oireachtas Crotty Cup.

Mick O'Connor inherited a love of music from his parents who came from Kerry and Roscommon. It was listening to Barney McKenna of 'The Dubliners' that inspired him to take up the banjo in 1967. Antóin and Mick are well know to followers of Irish music as regular performers in street sessions at the Fleadhanna Cheoil. Over the years well known Belfast flute player Marcus Ó Murchú and fiddler Denis 'The Hat' McMahon from Kerry became regulars in the sessions with Antóin and Mick.