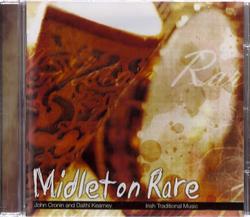 by
John Cronin and Daithí Kearney

Irish traditional music is a rare commodity in East Cork but for the past few years box player John Cronin and banjo player Daithí Kearney have been playing in Wallis' Bar in Midleton. Both were influenced in their music by their parents and their upbringing in Newmarket and Tralee respectively. This album is heavily influenced by their shared enthusiasm for the music of the Sliabh Luachra region.