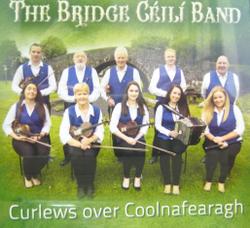 by
The Bridge Ceili Band

The Bridge Ceili Band was formed when nine musicians from the border area of Kildare, Laois and Offaly came together to form a band to compete in the Leinster Fleadh in 1970. They would win the Senior Ceili Band Competition at that Fleadh, before going on to win six All-Ireland titles. Today, despite many personnel changes, they retain the original 'Bridge sound', with the same ensemble of five fiddles, two flutes, accordion, piano and drums.