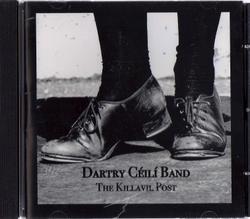 The Dartry Céilí Band formed in 2007 and hail from Co. Sligo. They have become in a very short time, a top ranking band, having won the All-Ireland Senior Céilí Band competition in 2009. Dedication, motivation and individually strong players has seen to this, coupled with that North Connacht, joyous fiery style (I'm biased!). The counties of Monaghan, Mayo and Roscommon are also represented in the lineup. Listening to them play, it's obvious they are very disciplined, whilst still retaining the character of the music. A band well worth the attention of anyone interested in traditional music and dance. Céilí bands have been an integral part of the traditional music scene over the years and long may it continue. “Stay with it!” Matt Molloy Comprising of flutes, fiddles, concertina, accordion, piano and drums, the band plays with great energy and drive. In addition to the dance tunes, there are two songs on this recording, ‘The Piper’ by Cian Kearins and ‘Far Away in Australia’ by Noelle Carroll.