Dundalk’s Old Gaol at the rear of Dundalk Garda barracks, (now home to the NE Regional Centre for Comhaltas Ceoltóirí Éireann), was built in 1853 to relieve problems of the undersized gaol already in existence at Crowe Street (now Dundalk Town Hall).

It was designed by Mr. John Neville, who was county surveyor for Louth between 1840 and 1886. The total cost of the gaol when completed reached £23,000: £5000 more than was originally estimated.

The Italianate building is situated on an impressive site above a sloping green. The entrance building or governor’s house is now home to the Garda Síochana. It was constructed in granite ashlar, while the two cell buildings and gaol infirmary (now the County Louth Civil Defence headquarters) were constructed in rubble stone. A central building, which was originally the inspection hall, joined the two cell buildings and the entrance building. In the entrance building space was provided for the living quarters of the governor and the turnkeys, offices for the governor, visitor’s room, boardrooms, matron’s room and accomodation for the master’s debtors. 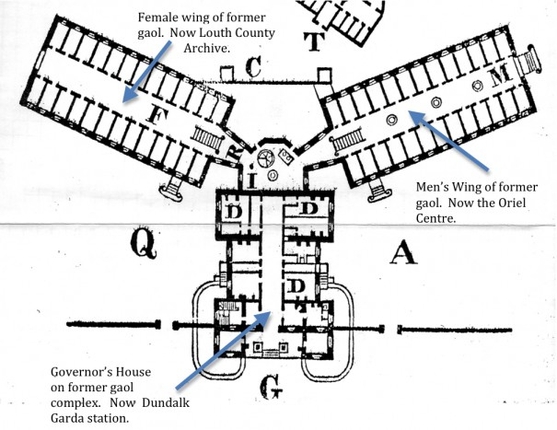 When originally built, the gaol was classed as a county borough gaol, for imprisonment admininistered by grand juries. The other class of gaol that existed at the time (up until the General Prisons Act (Ireland) was passed in 1877) was the convict prison or government prison used for penal servitude or transportation. Unfortunately not many archives relating to the gaol have been found. A prison inspector’s book for the period 1846-1852 is stored in Louth County Archives.

Some of the most famous inmates incarcerated at Dundalk Gaol were John Dillon, Frank Aiken, Austin Stack, Sean Treacy and Diarmuid Lynch.

The governor’s residence became a Garda Station in 1945, and between 1945 -1991 the gaol buildings were used as stores by Louth County Council.

In 2008, Louth County Council presented the west wing of the Gaol to Comhaltas Ceoltoiri Éireann to house the Oriel Cultural Centre. 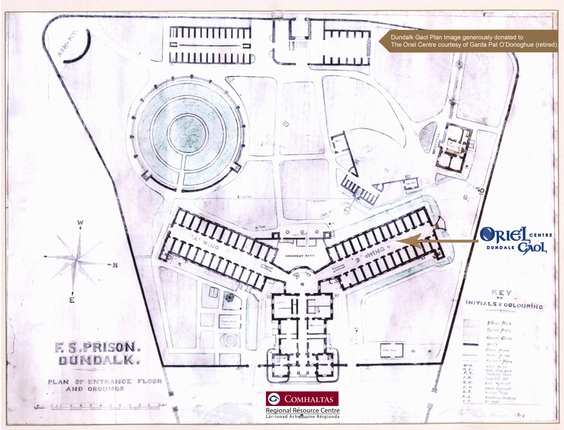 Drawing by a Prison Warder of Dundalk Gaol in 1914, original on display in The Louth County Archive