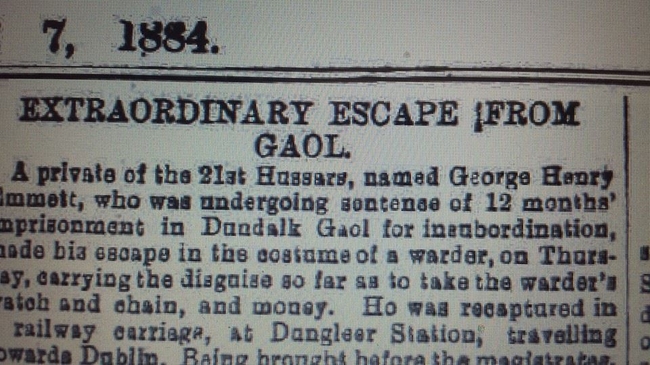 1875- successfully climbed over the 20 foot wall but was soon recaptured.

1882- escaped by means of a ladder that was left out during painting, he fell 25 feet and was found unconscious by the warders.

1884 - gained access to the Governor’s residence and took a warders uniform, dressed as a warder and left by the front door. He was recaptured soon after on the train to Dublin.

1/7/1922- escaped when their comrades hijack a train in Drogheda and drive it to Dundalk. They took warders and two civic guards and locked them up while liberating the three Drogheda men from the gaol.

4/7/1922- liberated when a little boy carrying parcels knocked on the gaol door. Two armed men gained entry and forced the release of the prisoners. They hijacked a passing pig lorry and made good their escape.

27/7/1922- a hole was blown in the wall on the Ardee Road side of the prison when members of the 4th Northern Division detonate explosives in a daring escape. 105 men including the divisional leader Frank Aiken escape qualifying it as the biggest gaol break in Europe.

1923- these prisoners gained their freedom when the back gate was carelessly left open and the Prisoners simply walked out. 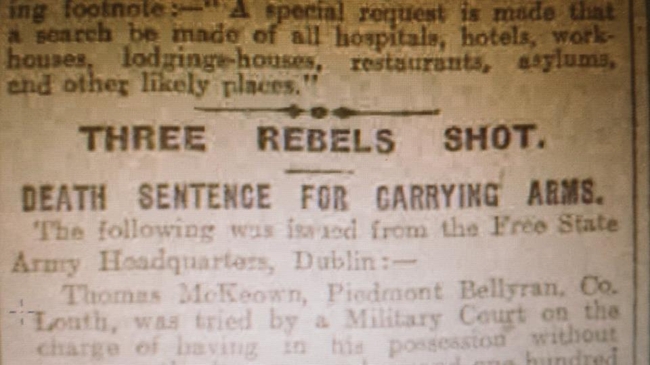 Piedmount, Bellurgan, Co. Louth. Tried by a military court on the charge of having firearms in his possession without proper authority.

Carromannon. Belleeks, Co. Armagh. Tried by a military court on the charge of having firearms in his possession without proper authority.

Killcarn, Navan, Co. Meath. Tried by a military court on the charge of having firearms in his possession without proper authority.

All three men were found guilty and sentenced to death. At 8 AM on the morning of the 13th of January 1923 they were executed by a Free State firing squad at the Louth County Gaol. It is thought that the men were laid to rest on the grounds of the gaol until the government decided to hand over the bodies of the 102 men executed throughout Ireland during the civil strife 1922-1923. Thomas McKeown and John McNulty were re-interred in the republican plot at Dowdallshill in November 1924. John McKeowns last letter is on display at the Louth County Museum.