There are some well known stories concerning prisoners who spent time in the gaol at Dundalk including:

One notable inmate incarcerated in Dundalk Gaol was James Cartan, owner and editor of The Dundalk Democrat in 1854, convicted of liable against local landlord - Lord Clermont Thomas Fortescue, 1st Baron Clermont (1815 – 1887), who was an Irish Whig politician. He had sought election of his son for the constituency of Louth which was vigorously opposed by James Cartan over his suitability as a representative for the county., Cartan continued to write editorials whilst a prisoner, the liable was eventually paid by Mr. Cartan’s supporters and thus securing his release. Others included Land League reformists such as MPs John O'Dowd (Sligo) and John Dillon (Tipp) as “agitation suspects” in 1881-82 held on charges of sedition, with the introduction of The Coercion Act of 1881. 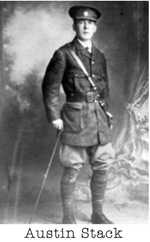 The Gaol featured in the Anglo-Irish struggle when a hunger strike took place amongst the prisoners led by Austin Stack who later became Minister for Home Affairs from 1921-1922. Stack had captained the Kerry team to an All-Ireland football championship in 1904 and in 1908 he was sworn into the IRB by Cathal Brugha. By 1916 he was commandant of the Kerry Brigade. After his involvement in the failed arms landing by Roger Casement he was captured and sent to Spike Island. Following the general release of prisoners in June 1917 he returned to Kerry but was soon rearrested for illegal ‘drilling’. He was sent to Mounjoy and was one of the leaders of a hunger strike which ended with the death of Thomas Ashe. He was transferred to Dundalk Gaol in November 1917 were another hunger strike soon followed. 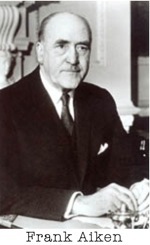 Frank Aiken was a prisoner in the gaol during the Civil War. He escaped in a successful attempt to release the anti-treaty prisoners held in Dundalk. A mine was placed against the wall on the Ardee Road, which was followed by a grenade attack on the gaol. Having been previously alerted, 105 prisoners escaped including Frank Aiken qualifying it as the largest escape in Europe.

Aiken was elected to Dáil Éireann in 1923 as a Sinn Féin candidate for Louth. He was continuously re-elected for Fianna Fáil in Louth for the next fifty years. He served as Minister for Defence, Minister for Finance and Minister for External Affairs. He has often been referred to as the father of Irish foreign policy. 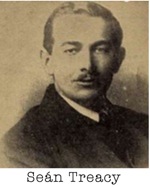 Sean Treacy, an Officer of the Third Tipperary Brigade was imprisoned in Mountjoy Prison for his role in the Battle of Ashbourne in North County Dublin during the 1916 Rising. Others imprisoned with him included Austin Stack, Finian Lynch and Thomas Ashe. The initial lack of political status afforded to the political prisoners prompted a hunger strike in September 1917. Stack, Lynch and Ashe led the hunger strike.  Ashe died as a result of force feeding and subsequently their concessions were granted.

In the middle of November 1917 the prisoners were moved to Dundalk Gaol. The concessions won had not been adhered to in Dundalk. ‘Skilly’ was being served at meal times. The prisoners refused this food and a new hunger strike began. The hunger strikers included Austin Stack, Sean Treacy, Michael Brennan and JJ Walsh. The strike lasted eight days. The prisoners were released in batches under the “Cat and Mouse” Act. Treacy was one of the first to be released from Dundalk as the prison doctor had become alarmed at his condition after the hunger strike.

Treacy was re-arrested on 28th February 1918 and was sent back to Dundalk Gaol. His first action was to continue the hunger strike. During the hunger strike the Tipperary Volunteers were planning to free Treacy from Dundalk. They initially sought to capture and keep hostage two R.I.C officers. When this plan fell through they decided to travel to Dundalk and blow a hole through the prison wall. The volunteers came by train to Dundalk, but the escape plan was abandoned since the hunger strike in Dundalk was called off.

Maurice Crowe and Dan Breen visited Treacy in prison and kept in contact by letter. Treacy instructed Breen on how to organise the Tipperary Volunteers and to remain in contact with him in prison by sending letters under cover to James McGuill and Miss Matthews in Dundalk.

When other prisoners arrived in Dundalk, military classes were held under the guise of Irish classes led by Dick McKee. Whilst still in Dundalk, Crowe remained in contact with the Tipperary Volunteers. During the conscription crisis of 1918 he sent a detailed letter to Maurice Crowe on how to disrupt the British military forces operating in their area. Treacy got to join Crowe when he was released in June 1918. Upon his return to Tipperary he was appointed Volunteer Organiser for South Tippperary.

Diarmuid Lynch from Tracton, Co Cork was one of the architects of the 1916 Rising. Lynch was the last man out of the GPO on Friday April 28th, when he and Harry Boland dashed from the burning building, having dismantled the homemade bombs stored in the basement. Following his release from Lewes Prison in Sussex he was elected to the Sinn Féin Executive in 1917 and was appointed as ‘Food Controller’. In this role he campaigned against Irish bacon and dairy products being exported to feed the British troops fighting in Europe. Part of him campaign involved intercepting a herd of swine which was being driven towards the North Wall in Dublin for export.  He had the pigs killed and the meat distributed to locals.  While imprisoned in Dundalk Gaol for his actions Lynch pulled off a coup - he and his fiancée, Kathleen Quinn of Kildare were secretly married under the noses of the prison authorities. The marriage took place at noon on April 24th the precise time and date of the commencement of the Easter Rising, 2 years before.

Seamus O’Neill (professor at Rockwell College and later O.C. of the Cashel Battalion) and Michael Brennan from Clare (later Chief of Staff of the National Army) who went on hunger strike with Treacy. They continued their protest until the conditions won in Mountjoy following the death of Thomas Ashe were reinstated in Dundalk Gaol.

Patrick Hartigan was the only prisoner to escape over the twenty-foot wall of the gaol in 1875. However, his feat was shortlived as he was later recaptured. In January 1882 a convict by the name of John Conlon serving a sentence of seven years penal servitude for high way robbery also made a daring attempt at escape from Dundalk Gaol. He made the perilous decision to traverse the high prison wall when he made use of a painter’s ladder which had been left out. He fell a height of 20 feet and sustained such serious injuries that he was found unconscious by the prison warders sometime later.

Although the last hangings that took place in Dundalk were at the previous gaol in Crowe Street, the execution of prisoners did take place in Louth County Gaol. In January 1923, Thomas McKeown from Cooley, John McNulty from Belleek and Thomas Murray from Co. Meath were executed by Free State firing squad. The three men had been found with weapons and ammunition and had been court martialled and sentenced to death at Dundalk Gaol. The executions took place at 8.00 AM on the 13th with three more executions taking place at the barracks two weeks later. This was at the height of the violence and recriminations of the Irish Civil war which was not to draw to a close until May of 1923.